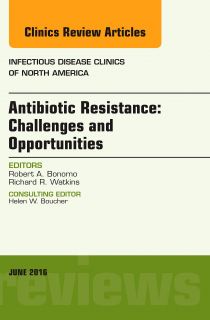 For many years, physicians and the public assumed that the discovery of new antimicrobial agents would outpace the ability of bacteria to mutate and develop drug resistance. Yet the development of new antibiotics has not kept up with bacterial evolution, especially since the late 1990's. At that time a multitude of pharmaceutical companies abandoned antibiotic research because of strong economic disincentives. For example, it is challenging for these companies to recuperate the investment (typically in the hundreds of millions of dollars) made in developing a new antibiotic, which is typically prescribed for a few days, compared to drugs that treat chronic conditions like heart disease or mental illness. This situation has led the U.S. federal government to take a more active lead in addressing antibiotic resistance. Recently, the White House announced an action plan that includes improving surveillance, developing better diagnostic tools, accelerating drug development, and improving global coordination of antibiotic resistance issues. Equally important is the $1.2 billion dollars that has been pledged to fund these efforts. While we await the implementation of new policies, this issue of Infectious Disease Clinics of North America brings together leading authorities in the field of antibiotic resistance who discuss current issues including antibiotic stewardship, the changing role of the microbiology laboratory in determining antibiotic resistance in gram-negative pathogens, the continuing spread of metallo-ß-lactamases, ESBLs and KPCs, antibiotic options for treating resistant gram-negative infections such as colistin and tigecycline, resistance mechanisms and new treatment options for Mycobacterium tuberculosis, emerging resistance mechanisms in aminoglycosides, issues with antibiotic resistance in immunocompromised patients, new ß-lactamase inhibitors in the clinic, and resistance in VRE and Staphylococcus aureus. Additionally, combination therapy for resistant gram-negative infections has been advocated by some authorities and the advantages and disadvantages of this strategy will be reviewed.

ADDITIONAL INFORMATION
PRODUCT'S REVIEW
Write Your Own Review
Only registered users can write reviews. Please Sign in or create an account