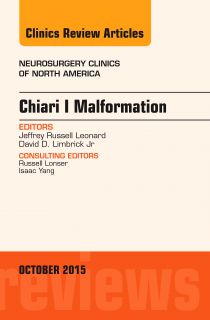 Chiari Malformation, An Issue of Neurosurgery Clinics of North America

Author
By Jeffrey Leonard, MD
Be the first to review this product
ISBN
9780323400923
28-10-2015
PRODUCT DESCRIPTION
This issue will cover chiari malformation in both children and adult populations. In the past, it was estimated that the condition occurs in about one in every 1,000 births. However, the increased use of diagnostic imaging has shown that CM may be much more common. Complicating this estimation is the fact that some children who are born with the condition may not show symptoms until adolescence or adulthood, if at all. CMs occur more often in women than in men and Type II malformations are more prevalent in certain groups, including people of Celtic descent.
ADDITIONAL INFORMATION
PRODUCT'S REVIEW
Write Your Own Review
Only registered users can write reviews. Please Sign in or create an account