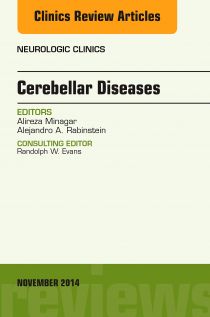 Author
By Alireza Minagar, MD, FAAN
Be the first to review this product
ISBN
9780323326605
13-11-2014
PRODUCT DESCRIPTION
This issue of the Neurologic Clinics is dedicated to the cerebellum and includes articles on its functional neuroanatomy and different cerebellar pathologies. Among the various reviews contained in this issue, there are two particularly unique articles devoted to the role of the cerebellum in human cognition and psychiatric diseases. Other topics include: the Cerebellum and Sleep; Toxic-Metabolic, Nutritional, and Medicinal-Induced Disorders of Cerebellum; Multiple Sclerosis and the Cerebellum; and Infections of the Cerebellum, among others.
ADDITIONAL INFORMATION
PRODUCT'S REVIEW
Write Your Own Review
Only registered users can write reviews. Please Sign in or create an account