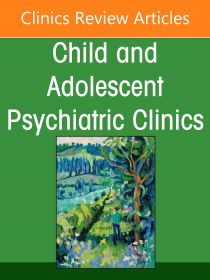 Emotion Dysregulation and Outbursts in Children and Adolescents: Part II, An Issue of ChildAnd Adolescent Psychiatric Clinics of North America

Author
Edited by Gabrielle A. Carlson, MD and Manpreet Kaur Singh
Be the first to review this product
ISBN
9780323762564
10-06-2021
PRODUCT DESCRIPTION
This issue of Child and Adolescent Psychiatric Clinics, guest edited by Drs. Gabrielle A. Carlson and Manpreet Kaur Singh, is Part II of a two-part issue covering Emotion Dysregulation in Children. This issue is one of four selected each year by our series Consulting Editor, Dr. Todd Peters. Topics discussed in this issue include but are not limited to: Explosive Outbursts at School; Treatment of Childhood Emotional Dysregulation During Inpatient and Residential Interventions; Psychopharmacology of Treating Explosive Behavior; Treating explosive irritability in pediatric bipolar disorders; Evidence Base for Psychosocial Interventions for the Treatment of Emotion Dysregulation in Children and Adolescents; Preventing Irritability and Temper Outbursts in Youth by Building Resilience; Psychoeducational Treatments for Mood Dysregulation; A Modular, Transdiagnostic Approach to Treating Severe Irritability in Children and Adolescents; Longitudinal Outcome of Chronic Irritability; and the future of irritability in children, among others.
ADDITIONAL INFORMATION
PRODUCT'S REVIEW
Write Your Own Review
Only registered users can write reviews. Please Sign in or create an account
CUSTOMER ALSO BOUGHT