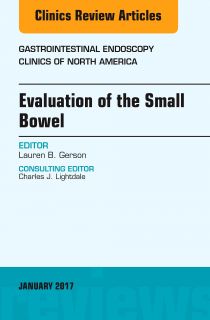 Evaluation of the Small Bowel, An Issue of Gastrointestinal Endoscopy Clinics

Author
By Lauren B. Gerson, MD, MSc
Be the first to review this product
ISBN
9780323482608
06-12-2016
PRODUCT DESCRIPTION
Endoscopic access to the small bowel has advanced significantly since the introduction of video capsule endoscopy and deep enteroscopy in early 2000. Other major advances have occurred in imaging modalities involving computed tomography and magnetic resonance studies. Due to these advances, the recent 2015 ACG guideline changed the terminology from "obscure to "small bowel bleeding because the majority of cases now can be found to have a small bowel source. The improvements in technology have advanced our ability to visualized vascular findings, inflammatory lesions, and small bowel neoplasms. Articles in this issue are devoted to these improvements in technology.
ADDITIONAL INFORMATION
PRODUCT'S REVIEW
Write Your Own Review
Only registered users can write reviews. Please Sign in or create an account