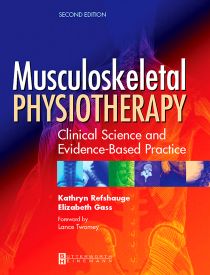 Paperback
Skip to the beginning of the images gallery

Author
By Kathryn Refshauge, PhD, MbiomedE, GradDipManipTher, DipPhty
Be the first to review this product
ISBN
9780750653565
21-09-2004
Learn More
PRODUCT DESCRIPTION
* The section on bone and bone health will be expanded. A new section on ageing bone will be included, and also a section on prevention and management of osteoporosis

* The use of questionnaires in the history will be thoroughly revised. The section will be expanded to include more of the appropriate questionnaires and their reliability and validity will be evaluated.

* Outcome measures were previously mentioned in various parts of the text. The importance of outcome measures will be made more explicit and will become a whole chapter.
At the time the first edition was written, there was a need for a well-referenced text to interpret and analyze current scientific knowledge in clinical practice and to provide a clinically applicable text in the musculoskeletal area of physiotherapy that was academically rigorous. The second edition builds upon the foundation provided in the first edition and introduces new material in areas previously lacking in evidence.

The second edition uses a similar approach to that of the first edition. That is, the evidence is examined and application to the clinical setting discussed. In the first edition, the paradigm of contemporary physiotherapy practice was explored. In the second more detailed information is presented about the explicit and implicit assumptions that form the basis of current practice.
ADDITIONAL INFORMATION
PRODUCT'S REVIEW
Write Your Own Review
Only registered users can write reviews. Please Sign in or create an account