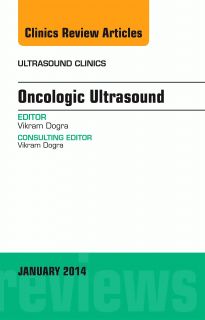 Author
By Vikram S. Dogra, MD
Be the first to review this product
ISBN
9780323264167
02-12-2013
PRODUCT DESCRIPTION
The detection of tumors in various organ systems remains one of the central applications of ultrasound. This issue of Ultrasound Clinics will consist of 10 articles under the title "Oncologic Ultrasound and will feature several articles on elastrography (a developing method for distinguishing tumors from normal tissue), as well as endoscopic ultrasound in oncology, ultrasound guidance in tumor ablation, and ultrasound guided biopsies. The editor, Vikram Dogra, who also serves as consulting editor of the series, has put together an issue that addresses the core clinical concerns of oncologic imaging for the radiologist specializing in ultrasound.
ADDITIONAL INFORMATION
PRODUCT'S REVIEW
Write Your Own Review
Only registered users can write reviews. Please Sign in or create an account